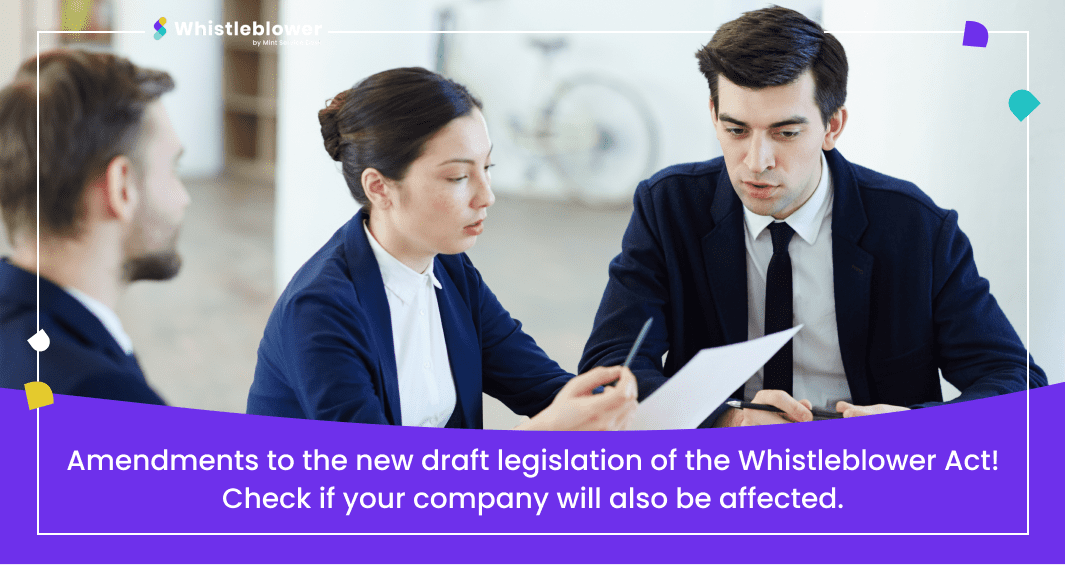 On April 12, 2022, the Ministry of Family and Social Policy published a new draft legistlation of the act on the protection of Whistleblowers on the website of the Government Legislation Center. This is another document, after the one issued at the end of 2021, that regulates cases that are unclear or need improvement. What changes to internal reporting and retaliation are included in it?

Changes to the issue of reporting irregularities through the internal channel.

The purpose of the Directive of the European Parliament and the Council (EU) is to protect persons who report irregularities at work. One and the first of the channels for signaling violations is the internal one, which should be provided by the employer and function within the organization. The draft, published on April 12, introduces several significant changes, some of which relate to the internal reporting system. We present some of the most important notations below.

The original version assumed that the law applies to employers who employ at least 50 employees. In turn, the new project mentions legal entities for which at least 50 people perform their work. The difference between an "employee" and a "person" is important here because it means that the law in its scope will cover not only entities that employ workers and temporary workers but also persons providing work on a basis other than an employment contract.

Employers who are not subject to the provisions on legal entities in the private and public sectors and those owned or controlled by these entities may adopt the internal reporting rules voluntarily.

The new draft also expanded the catalog of people who may report or publicly disclose information about violations of the law to apprentices, officers, and professional soldiers.

The issue of consultations with the trade union organization and a representative of persons who provide work for a given legal entity has also been clarified. According to the new draft, they are to last no less than 7 days and no longer than 14 days from the date on which the legal entity submitted the draft internal procedure.

Importantly, the explanatory memorandum to the act mentions the method of reporting violations and is to be only an electronic channel. Consequently, every legal entity covered by the directive should provide its employees with this type of internal Whistleblowing channel.

Another area that has been affected is retaliation. According to the new draft, each Whistleblower is also protected against attempts or threats of retaliation. The catalog of this type of proceedings has been expanded and currently, retaliatory actions also include discrimination, mobbing, causing a financial loss, loss of income, andother non-material damage, which includes damage to the reputation or hindering finding a job in a given sector in the future.

If a person has reported a breach and suffered damage as a result, or if false information has been disclosed to the public, compensation may be demanded. At this point, the change concerns the amount, as its value has been changed from not less than the minimum wage to an amount equal to at least the average wage in the enterprise sector in force on the date of filing or public disclosure.

In conclusion, the new draft introduced some significant changes that are currently under consideration. Atthe moment, it is not yet clear whether the proposed legal regulations will be approved by employers and whether all changes will be approved. Legislative work at the government level is still ongoing and the act may be amended again. Currently, whether and when this will also happen is unclear, however, it does not change the fact that legal entities are obliged to comply with the general provisions of the directive, inter alia in terms of the implementation of the system for receiving and handling tickets. Whistleblower is the software that meets all the legal requirements of the directive and guarantees the protection of the confidentiality of the identity of persons reporting irregularities.

How to implement a whistleblowing system for Whistleblowers in the organization?