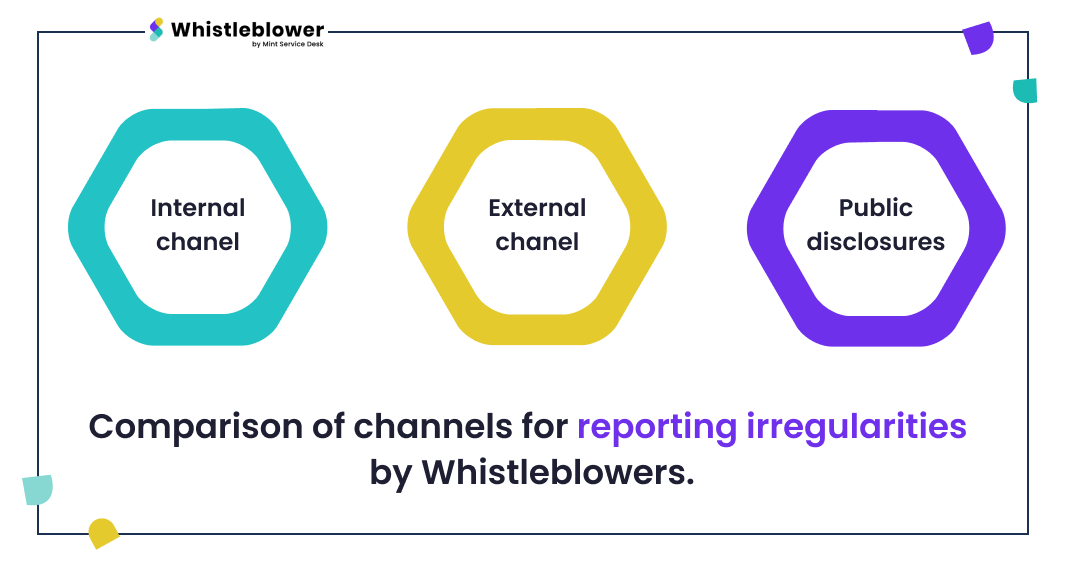 Due to the entry into force of Directive (EU) 2019/1937 of the European Parliament and the Council, Whistleblowers have the option of reporting irregularities and violations they have witnessed through three different channels: internal, external and by public disclosure. Which one should you choose? What is the order of reporting?

The new draft act on the protection of Whistleblowers presented in April 2022 by the Ministry of Family and Social Policy defines in detail internal reports. Below we present the most important assumptions mentioned in the act.

In summary, the internal channel is the first step in signaling problems in the workplace. The new draft act on the protection of Whistleblowers mentions the method of reporting internal breaches and is to be only an electronic channel. Whistleblower is the software that meets all the legal requirements of the directive and guarantees the protection of the confidentiality of the identity of persons reporting irregularities.

Witnesses of violations are indeed encouraged to initially report them via the internal channel, but the new draft provides for the possibility of external reports without prior ticket via the internal channel. It has been assumed that the central body is the Ombudsman and it is he or the public body that accepts, performs initial verification, and sends all external tickets to the competent authorities.

It is the task of the public body to prepare reports for each calendar year that contain information on the statistical data of the external reporting. Then, by 31 January each year, the report must be submitted to the central authority, which sends the final version to the European Commission.

Public disclosure is the provision of information about an infringement of the law to the public through the mass media, such as television or the press. This channel is the last resort and is intended for use by those who have reasonable grounds to believe that a breach may pose a threat to the entire public interest. Whistleblowers may choose to do so in cases where they have not received feedback or have not received corrective action through internal and external channels.

When choosing a reporting channel, Whistleblowers should take into account the specifications of each of the above-mentioned options and pay attention to the issues of data confidentiality protection and ways to protect against retaliation. The internal channel for reporting irregularities is certainly the fastest way to draw attention to problems in the organization. Use the safe and fully compliant with directive Whistleblower system.

Directive on the protection of Whistleblowers vs. GDPR.