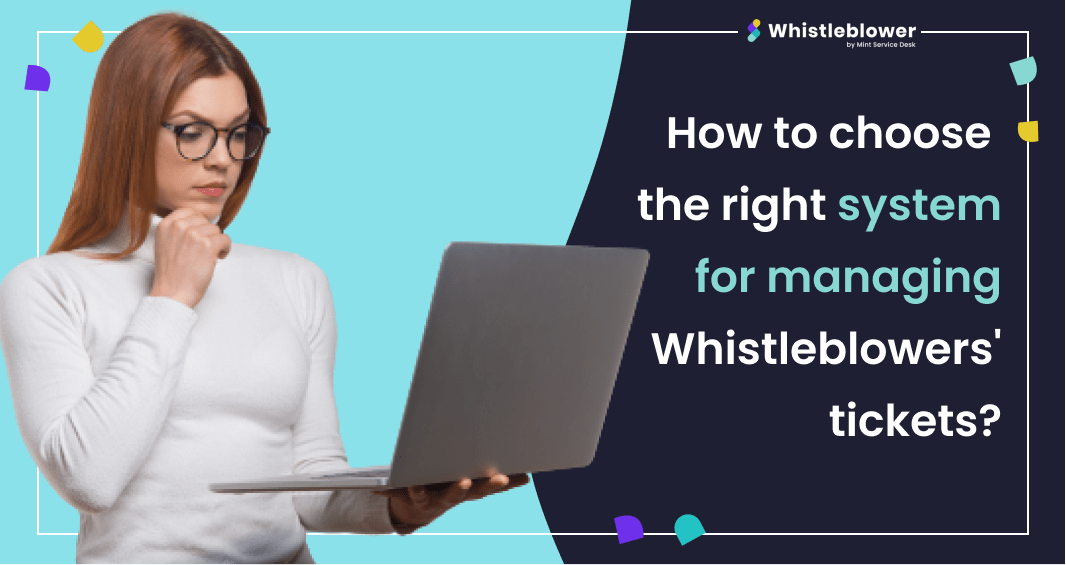 The draft law on the protection of Whistleblowers has been known since April, and even though legislative work at the government level is still ongoing, the employers affected by the law are already obliged to introduce specific actions. One issue they need to consider is the selection, implementation, and managing of the reporting channel.

What are the employer's obligations?

One of the main obligations that all employers covered by the Whistleblower Protection Directive must fulfill is to create and enable internal reporting channels for employees. In addition, employers are required to:

- creating procedures to be followed after receiving a notification of a problem,

- protection of the confidentiality of both the identity of Whistleblowers and the entire process,

- keeping a register of notifications,

- informing Whistleblowers about the progress in solving the problem,

- ensuring easy access to information on the procedures contained in the Directive.

The Whistleblower is a system compliant with the provisions of the Directive of the European Parliament and of the Council (EU), which helps to fulfill the above obligations.

How to choose a ticket managing system for Whistleblowers?

First of all, the implementation of an internal Whistleblower system is the responsibility of every employer, which is covered by the Whistleblower Protection Directive. Importantly, however, in the justification of the new draft act, the software was recognized as the only acceptable internal channel. The features that a noteworthy system for Whistleblowers should have are:

- Compliance with the requirements and provisions of the Whistleblower Protection Directive. Safety, universal availability, and ease of use are some of the conditions of the European Union.

- Ability to choose the filing category. The system must have an option to report in all sectors mentioned in the Directive.

- Data encryption when creating a request. The confidentiality of the collected information is very important when it comes to Whistleblowing so that every person who was a director indirect witness of the irregularities felt protected and not worried about the repercussions of reporting it.

- Anti-spam protection of each report with for example the captcha. This type of verification is effective in preventing any automated attempts to attack the system and helps to separate real reports from those resulting from a joke or attack.

- Two-way communication between the person receiving the report and the reporting person. According to the provisions of the Directive, the Whistleblower should receive a reply on the acceptance of the application within 7 days from the notification of the problem, or in the case of not receiving the confirmation of the application, the feedback should be sent to him within three months from the lapse of 7 days from the date of the ticket.

All the above-mentioned features and many more possibilities, such as for example tracking the time of ticket, the ability to configure the interface for individual needs, the presence of a personalized ticketing panel, has a system for managing incidents  Whistleblower.

What does the Whistleblower system look like in practice?

At this point, let's consider one hypothetical situation related to abuse in the workplace, but let's not forget that there are many more areas in which Whistleblowers can operate, and all of them are described in detail on the Whistleblower website.

The employee is mobbed by his supervisor, who entrusts him with more and more tasks, some of which go beyond the scope of his duties, publicly pointing out mistakes, negating all ideas and behaving in an insulting and rude manner. The consequence of these activities is a decline not only in the quality of work of the persecuted employee but also in their well-being and self-esteem. In this situation, it would seem most reasonable to report such behavior to the supervisor, but it would involve a conversation, about which the whole office would certainly find out, which in the end could involve retaliation by other employees.

It is precisely in order to maintain the confidentiality of the identity of reporting persons and to reduce the fear of repercussions, that the European Union has introduced a directive containing guidelines designed to protect all Whistleblowers. The best solutionis the implementation of an IT system, due to which reporting is quick, safe, and anonymous.

How to implement a whistleblowing system for Whistleblowers in the organization?