New draft legislation of the act on the protection of Whistleblowers in Poland. Will it not be possible to make anonymous reports? 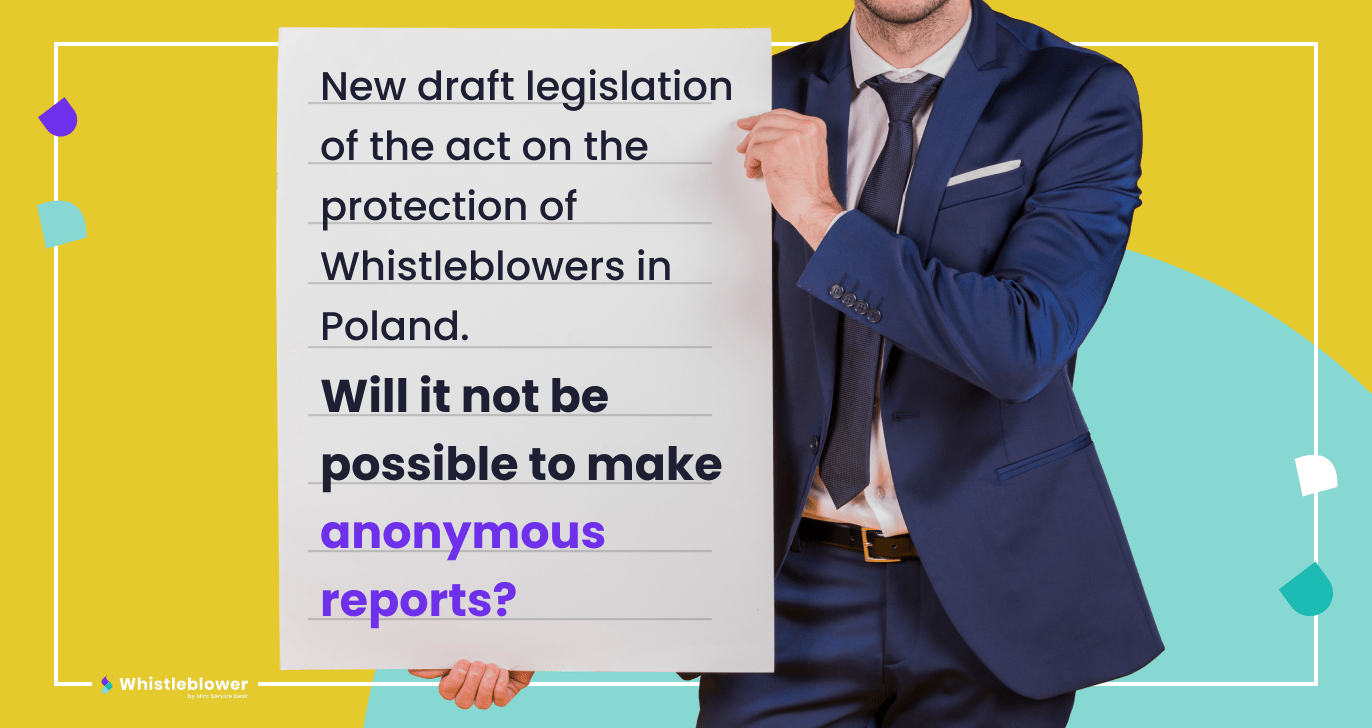 On April 12, 2022, the Ministry of Family and Social Policy published a new draft legislation of the act on the protection of Whistleblowers on the website of the Government Legislation Center. However, this does not change the fact that the legislative process is still ongoing, and currently the delay in implementation is over 4 months. What changes have been made? What is going on in the case of Whistleblower’s anonymity?

What changes were included in the new draft legislation?

A few days ago, a new draft legislation on the protection of Whistleblowers was published, which not only contained a few significant changes, but also significant inaccuracies.

The first case concerns the limit on the number of employees, above which employers in the organization are required to establish a system for receiving and handling internal reports. This matter required clarification because the first version of the draft contained information about 50 employees, which indicated people employed full-time. On the other hand, the new part of the draft already mentions 50 people performing work, which makes it possible to state that the act also covers people employed under, for example, civil law contracts. This provisionis therefore imprecise because it causes employers to guess in which cases new obligations apply to them, and in which they do not have to adapt to them. In a situation where they are subject to the rights contained in the document, they will be required to create an internal channel for reporting violations, including the implementation of an appropriate system, such as Whistleblower. Therefore, the final version of the act should contain a definition of the person performing the work, so that there is no room for such inaccuracies.

Other changes referred to in the new draft legislation include:

- Officers of uniformed formations and professional soldiers were also added to the catalog of persons who may become Whistleblowers.

- Expanding the catalog of matters that may be reported by Whistleblowers to include those that concern not only the financial interests of the European Union but also the Polish State Treasury. Irregularities may focus on issues of spending, subsidies andgrants.

- Introduction of resignation from the obligatory implementation of the internal notification system in offices and organizational units of municipalities with less than 10,000 residents

Can the reports be anonymous?

Until the new version of the draft was prepared, it was about protecting the confidentiality of the identity of persons reporting irregularities, which, in the most far-reaching interpretation, could mean anonymity. The new draft act proposes a flexible approach with regard to the possibility of implementing an anonymous procedure for making internal and external reports. It is assumed that the provisions of the Act will be applied to reporting information about a breach anonymously only in cases where the possibility of reporting information about a breach anonymously is provided for in the internal reporting regulations or the procedure for reporting breaches of law to a public authority.

What is the inaccuracy in this case? In the justification to the draft, there is a provision that informs that the Ombudsman, legal entities, and public authorities will not be obliged to consider anonymous reports. However, legal entities and public authorities remain free to receive anonymous reports on the basis of the regulations they adopt for their internal and external reporting paths. In this case, the anonymity of reports may be ensured, if provided for, on a voluntary basis, in the employer's internal reporting rules.

Importantly, the justification for the draft also includes the following entry:

"If information about a breach is reported to an employer, a public authority or publicly disclosed anonymously and, for whatever reason, the identity of a reporting person who experiences retaliation is subsequently disclosed, the provisions of the Protection Measures Act of the draft Non-Retaliation and Safe guards Chapter will be found in application if the conditions set out in the justified grounds for notification are met. ”.

The new draft does not change the issue of the need to introduce an internal reporting channel by employers who are subject to the Whistleblower Protection Directive. Entrepreneurs with 50 or more employees, excluding legal entities in the public sector, are still required to internally receive and resolve notices. The system that has all the most important functions needed to managing incidents is Whistleblower.