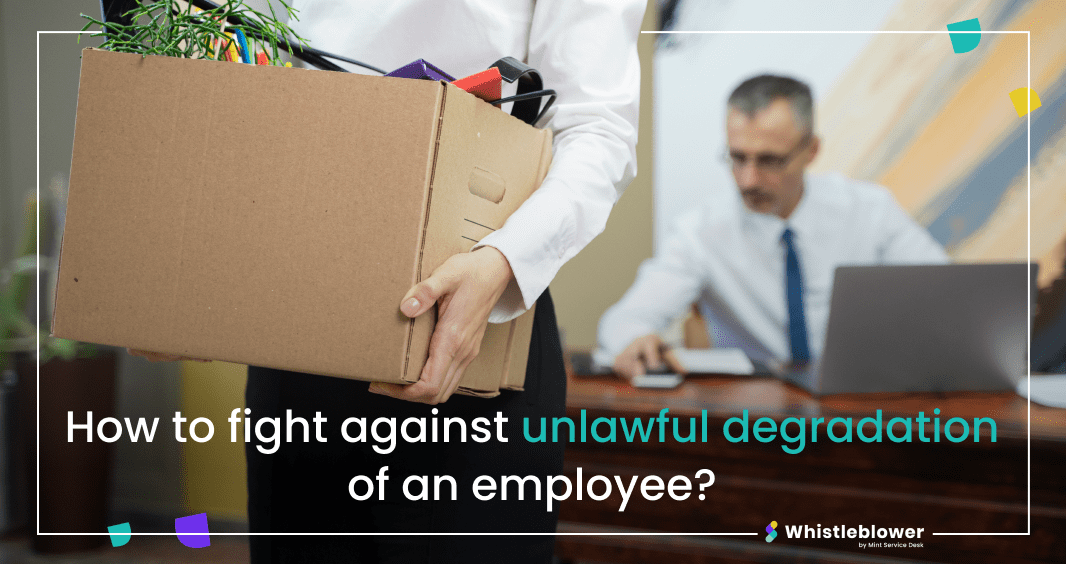 Due to the epidemiological situation, large economic downturns, and financial changes, companies are looking for various ways to reduce costs. One of the actions that can be taken by entrepreneurs is the degradation of workers, which in many cases may be illegal. What exactly is degradation? How does the Whistleblower Protection Directive help to fight it?

Degradation means the forced transfer of an employee to a position lower in the structure of the company in relation to the one he has held so far. It is connected with the change of employment conditions and is done with the help of a change notice, which is given to the employee by the supervisor. This document is made in writing and contains a notice of termination of work and pay conditions, and the employer may use it to change:

An example of degradation is a situation when, for example, a manager is transferred to a lower position, which has been subordinate to him so far, i.e. he is again at the level of regular staff. The reason for this is, among others merging departments, therefore the main management position may only be occupied by one person. Other examples are serious violations of the work regulations or health and safety rules.

On the other hand, unlawful degradation takes place, for example, when an employee returns from sick leave. Pursuant to the Labor Code, everyone has the right to return to the position previously held under the same conditions. The provisions also apply to people who are on sickness or rehabilitation benefits. It is also illegal to give women who have just given birth and are in the process of giving birth to an amendment notice.

Prior to the entry into force of the Whistleblower Protection Directive, many employees feared reporting because of the fear of being forced to change jobs or even fired. However, the introduction of international regulations prohibited this type of unlawful activity provided legal security for employees, and introduced a ban on the use of an amendment notice to Whistleblowers.

How can one prevent degradation?

There are many reasons for the degradation, and companies make decisions about it, including in cases of company restructuring, preventing recession, loss of efficiency, or occupational burnout of employees. One way to counteract unfair degradation is to appeal against it, both internally and, when the matter is more serious, in court. In order to protect their rights, employees may report unlawful practices, including unjustified change of position, using the internal channel for handling Whistleblower reports.

First of all, the use of an internal channel to signal the problem helps to resolve the conflict situation within the company, provides protection to the person reporting the violation, and guarantees that the case will be accepted and resolved. It is worth noting that retaliatory actions may not be taken against people who report irregularities and are employed under an employment contract. If there is a justified fear that such actions will occur, then the employer is to bear the burden of proof and proving that the actions taken by him are not retaliatory. Due to the fact that unjustified degradation is also one of the forms of mobbing and in this case it is of a retaliatory nature, its reporting is advisable and legally protects the Whistleblower.

To sum up, the forced change of the position and working conditions to be worse than before is an action that can be reported to the employer using the internal reporting channel. Whistleblower is a system that protects the confidentiality of the identity of persons, meets all legal requirements, and complies with the European Union directive. ‍